Legal to hunt and strictly controlled by the Namibian government, there is nothing as thrilling as hunting this fully adapted Kalahari predator. It's the pinnacle hunting experience for a big hunter.

This elusive and dangerous cat is one of the most resilient animals of the Big 5 to hunt in Namibia.

Leopards are incredibly shy but intelligent cats, with excellent senses. They usually appear at night, which is how they are able to avoid human contact. For the trophy hunter, the challenge cannot be greater. It is the thrill of this hunt that for centuries gets the pulse of the trophy hunter going. Hunting this dangerous game takes the right amount of planning and a combination of techniques to fool this animal. It requires physical strength, mental fortitude, patience and endurance. Tracking, baiting and hunting a leopard is one of the greatest challenges one can experience on an African hunting safari.

Contrary to popular belief, Leopard are NOT endangered in Namibia. Leopard hunting is strictly controlled by the Namibian government, and is both legal and sustainable. Every year the authorities issue a very limited amount of licenses, dependent on the size of the hunting area, the estimated leopard population in the area, and the success rate of the hunts in the past years. 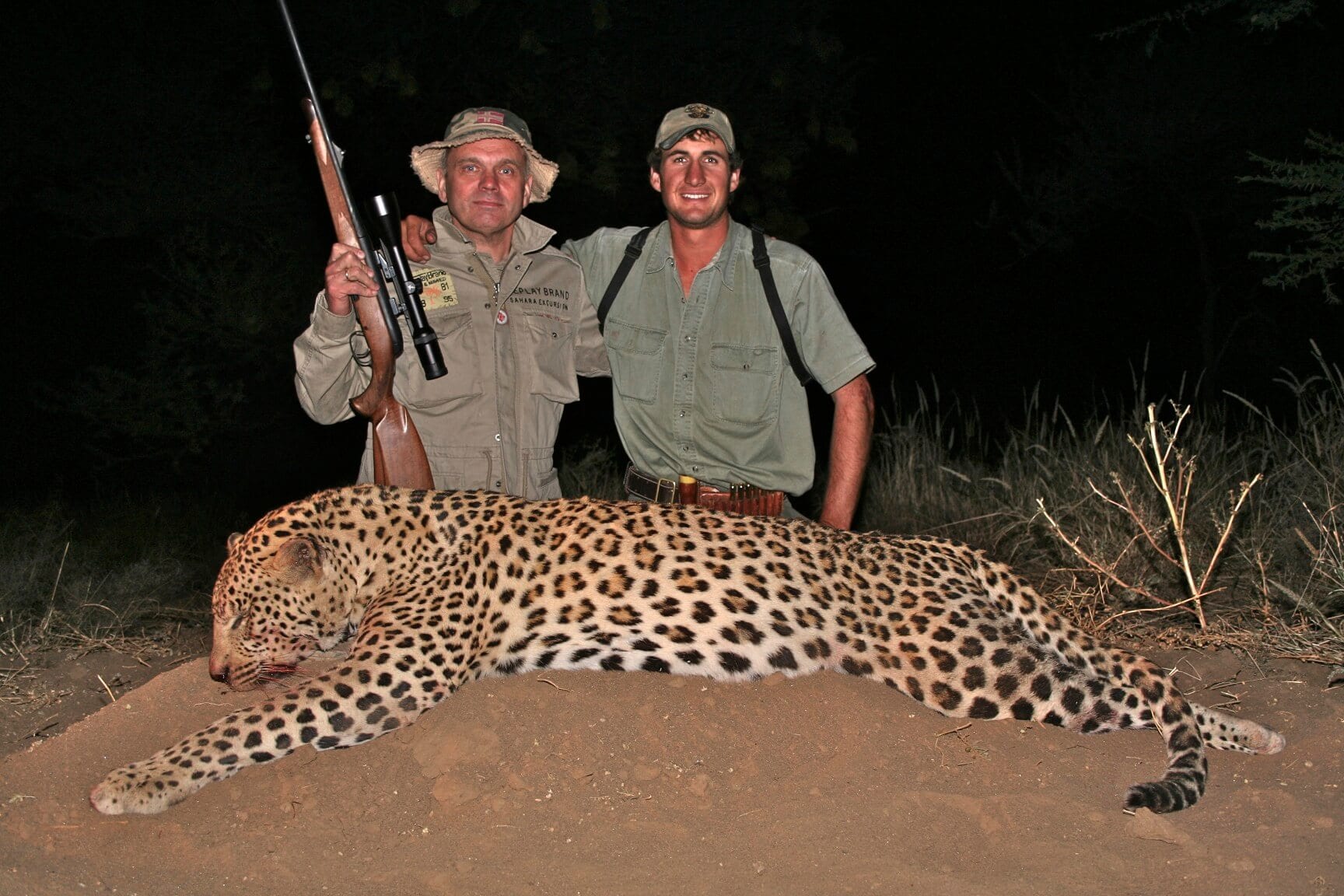 Leopards are highly adaptable, hunting a wide variety of prey from medium-sized antelope down to frogs and mice and are able to live in a variety of terrain, making them the most widely distributed of Africa’s Big Five game animals. They are usually solitary, holding and protecting a large territory which is roamed in its entirety on a regular basis.

They also vary in body size tremendously, a trait that is primarily influenced by the terrain they inhabit and the relative availability of their prey. Males are larger bodied, thickset and well muscled. Their heads are larger in relation to their overall size and their necks are thick and muscular. However it is difficult to distinguish between young males and mature females.

Due to their secretive nature it would be very difficult to successfully hunt leopard on a 14 or 21 day safari without baiting. Baiting is the most popular method, lying in wait at dusk from a blind 75 or more yards away. Leopard are very alert, usually coming to the bait the last few minutes before complete darkness. They have phenomenal eyesight and almost telepathic hearing. The slightest unnatural sound or flicker of movement will arouse his suspicion and make him disappear.

Leopards are the perfect predator, opportunistic hunters and massively strong for their size. They are, pound for pound, the most dangerous animal in the world when wounded, drawing a deep respect from all who have hunted this magnificent creature.